From 1886 sales of cash registers in the UK were made by J.W. Allinson, the first Agent outside of the USA.

On the 7th August 1895 John Henry Patterson sailed to Europe from New York with H. Theobald and C.E. Hall.

Arriving at the port they boarded the SS St. Lois for Le Havre calling in at Southampton on the way. Their continental trip, covering Berlin , Holland and Marseilles lasted from August 14th to August 19 at which time they travelled to London

They stayed in London from the 19th to the 31st of August and then travelled to Paris on the 8th September where they stayed until September 29th when they boarded the SS Bourgoyne for New York.

During his stay in London, Patterson removed Allinson as the company Sales Agent and engaged the legal firm of Kerley, Son and Verden, of 14 Great Winchester Street to act as the company solicitors and incorporate ‘The National Cash Register Co., as the USA company’s subsidiary in the UK.

Incorporation took place on the 6th November 1895, when the first shareholders, holding 1 share each were; Alexander Kerly, Henry Verden and A.W. Kerly (Alexander’s son) who were solicitors along with Alfred George Thiselton, a law clerk and George Wm. Ritchie who was named as company secretary.

The seventh shareholder Charles E. Hall, who had stayed in London after the departure of the president, was named Managing Director.

The original Capital of the company was set at £5000 divided into 5000 shares of £1 each, and a statutory Board Meeting was held on the 12th February 1896 at the solicitors office when no business was discussed. 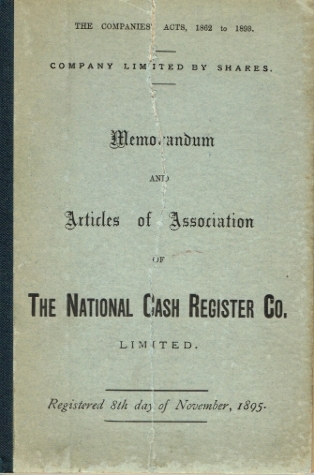 The first ‘Board Meeting’ followed on the same day with resolutions confirming the description of the company seal and the appointment of Lloyds as the company bankers.

The board then resolved that Thomas Corwin and George E. Shepherd both of Dayton be appointed as additional Directors.

It was also resolved that John H. Patterson be appointed the President of the Company.

The last resolution of the day stated that the President and Directors in the USA should form a committee, hold meetings and exchange minutes with the UK company Board.

The second Board meeting was held on the 10th March 1896 when the allocation of shares was decided as:- 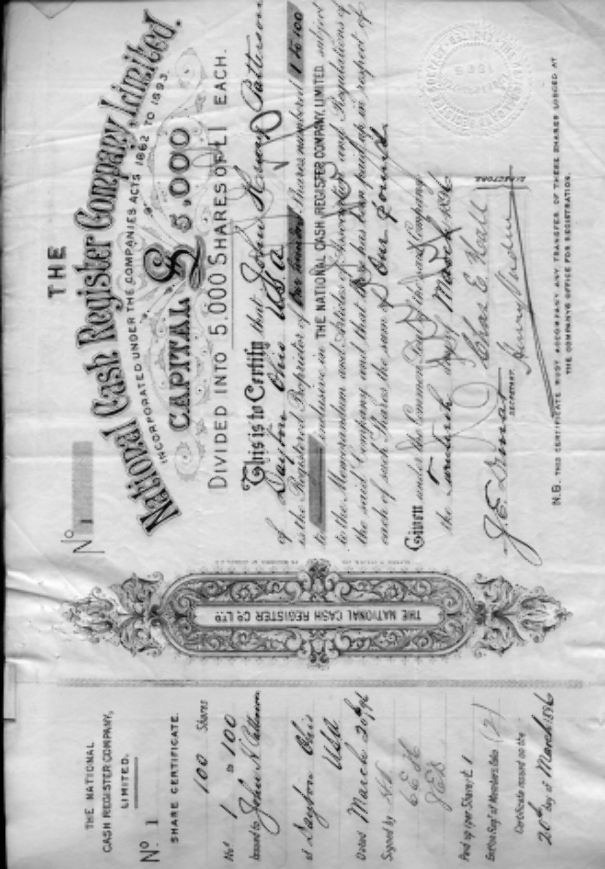 John Henry Patterson’s Share Certificate for shares No. 1 to 100

The National Cash Register Co. had three allocations of shares, 800, 300 and 3193 along with the 7 shares allotted at the incorporation making up the original £5000 Share Capital.

At a Board meeting held on the 18th June 1896 the Common Seal of the Company was affixed to two documents relating to J.W. Allinson leaving as Agent to the company. The first document was a settlement of book debts dated 6th December 1895 and the second document being an assignment of no. 356 Strand, which The National Cash Register Co. Ltd, took over as their Head Office. At the same meeting, the company began the process of obtaining British Patents after receiving a communication from Thomas Carney at NCR Dayton. 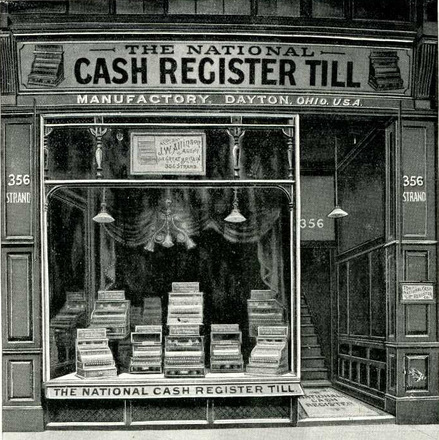 Allinson’s old office at 356 proved too small for the National and on the 3rd of February they took on the lease of a warehouse at 6 Helmet Court.

Allinson had taken on agents around the country and on the 9th March 1897 the company took on the lease of the first NCR office outside of London at 10 Bridge Street, Bristol.

On May19 1897 the Company granted power of Attorney in favour of Mr Charles E. Hall in relation to the agency in Milan which had been the responsibility on De Giovanni. Mr (Subsequently, In November 1897 he was appointed manager for Europe and then in 1898 his contract was suddenly cancelled!)

At the second General Meeting on the 3rd July 1897, John H. Patterson was present having sailed from New York on June 22 to be in London during Queen Victoria’s Jubilee Celebrations.
The accounts for the 13 month period to 28th December 1896 showed a profit of
£1460-9s 2½, an explanation for the low amount was given as resulting from the Managing Director and Company secretary being in the USA for part of the period.

A new Head office at 337 the Strand was proposed and the lease from John William Allen and John Charles Ridge was agreed.

Mr Patterson left London for France arriving at Longchamp on July 14th. His continental travels included Hamburg, St Petersburg, Odessa, Paris and Amsterdam before his return to London on the 18th October. 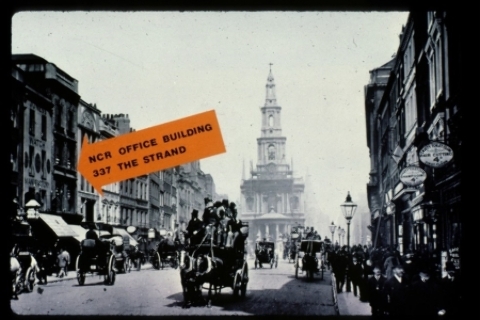 Plans for the modification of the new Head Office at 337 Strand were drawn up and presented by the architect, Mr Heron, at a meeting on the 7th December 1897. These were discussed and the builders, Mason Bros. appointed to carry out the work at a cost of £1998.

February saw the renting opening of two offices, at 31 Gordon Street Glasgow and at 26 King Street Manchester. By this time the company had moved to 337 and leased 356 Strand to Edistonia Ltd.

The 3rd Company general meeting was held on the 14th November when the auditors’ report showed  a profit for 13 months of £3693 8s 0d.

A 4th General meeting, 3 months later, held on the 23 February 1899 recorded revised accounts for 1899 as a loss of £490 7s 4d. This was accounted for by £3058 1s 11d written off for ‘Prospective Commission’ not yet paid to Sales Agents. Also taken into account was the increase of 5% on the cost or registers imposed by NCR, USA.

By July 19th 1899, only five months after moving to the new premises, NCR were advised that the premises would be demolished as part of the Aldwych redevelopment. The company secretary was requested to speak to the council surveyor. 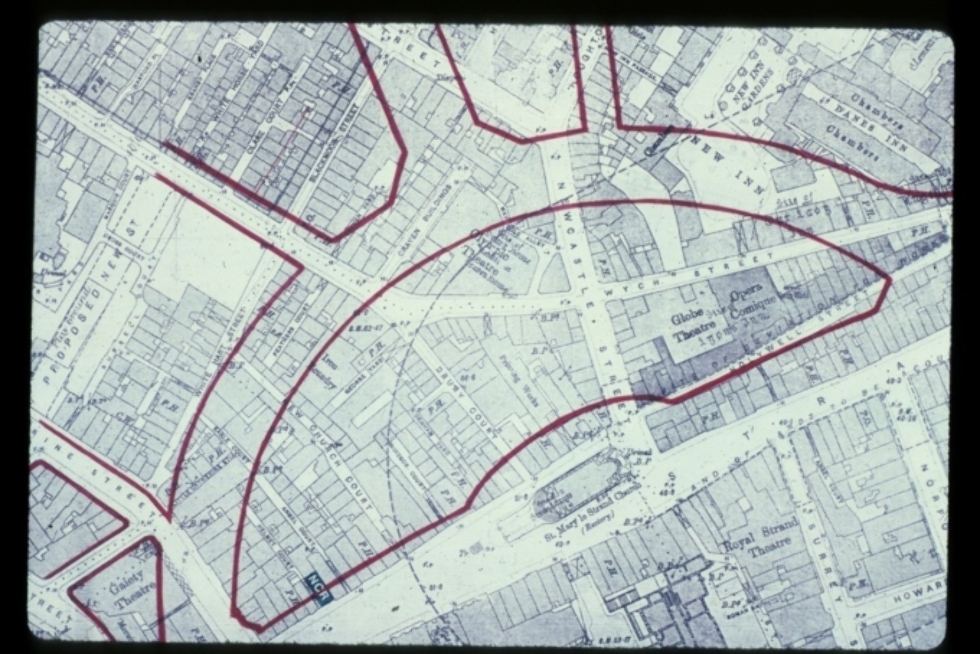 September 1899 saw George H. Carr being appointed a director and allocated 100 shares from the Dayton batch. The company also took out an overdraft of £25,000 at 4% interest.

The 5th General Meeting was held on the 24th April.

By the 30th April 1900 the company had made the decision to move again, this time to 124 Oxford Street and a lease on that property and also one for premises at 17 Hanover Street Edinburgh were signed and sealed at the meeting

The London County Council offered £6800 for 337 Strand but Henry Verden went to meet Wm Young of the County Council and ultimately, they agreed on £7500 for the buyout of the lease, fixtures and disturbance allowance. 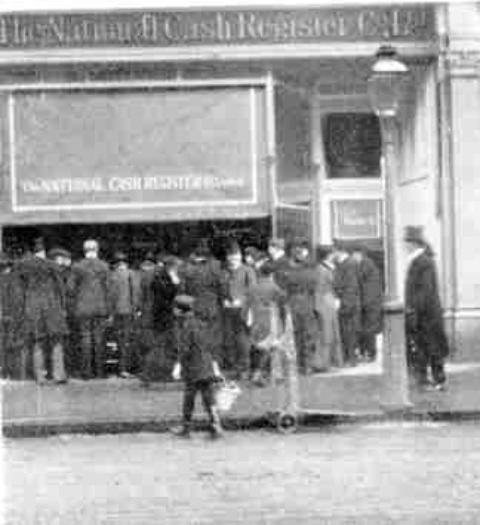