Stanley C. Allyn became assistant controller of the national Cash Register Company in 1916 at the age of 25. Thereafter he rose rapidly to become chief executive of the company.

His biography, "My Half Century with NCR", was published by McGrow-Hill, Inc. in 1967

1890-1970 ( New York Times)
Stanley Charles Allyn, who retired at the end of 1961 as chairman of the board of the National Cash Register Com pany, died Saturday night in Greenwich (Conn.) Hospital at the age of 79. He lived in Day ton, Ohio, and also had a home in Greenwich.

Mr. Allyn was president of the concern from 1940 to 1957, when he became chairman of the board. He was credited with a key role in diversifying the company into accounting, book keeping, adding machines and the computer field.

He also led in expanding overseas operations from under $20‐million annual sales in 1940 to 20 times that in 1961.

Mr. Allyn, who was often described as “Mr. Energy Un limited,” was a model of the traveling capitalist who flew about the world, spreading American ideas and ideals. Un til his retirement, the ruddy, white‐haired businessman av eraged five trips abroad each year, traveling 100,000 miles. 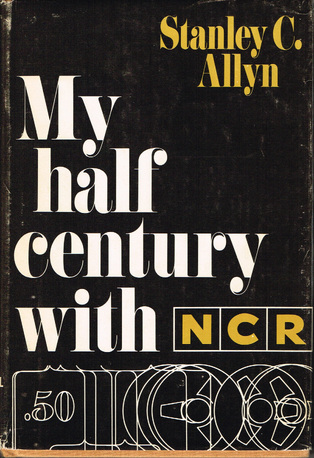 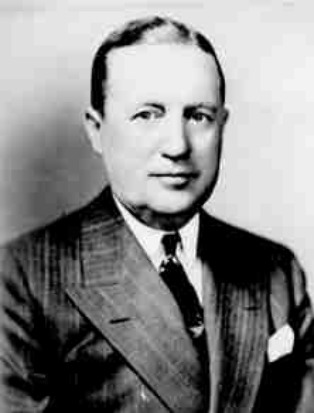 Time magazine in 1960 paid the following tribute to Allyn

MOST businessmen are happy if they get 10% of their profit from overseas business.

But not Stanley C. Allyn, the chairman of National Cash Register Co., whose products start with the grocer's $200 till and top off with a $1,000,000 electronic computer. "Chick" Allyn already counts 40% of his profit from his business abroad, figures to up that ratio to 50% this year. Says he: "We're not going to compete with foreign producers just by yelling for tariffs. It's going to take hard work. If we get fat and lazy, we'll wind up a second-rate nation."

CHICK ALLYN likes to say that his company's name is listed in the telephone book of every major city in the free world. N.C.R.'s lines of commerce spread out from Dayton, Ohio to seven plants and 500 offices in the U.S., and then out to an overseas empire on which the sun never sets: nine major plants strung from Europe to the Far East, sales offices in 121

Allyn is the very model of the traveling capitalist, who bounces around the world spreading

U.S. ideas. At 68 he is nearing the rocking-chair age, but the ruddy, grey-haired

businessman averages five trips abroad each year, traveling 100,000 miles. Says he: "You can't learn about world conditions sitting on the banks of the Miami River in Dayton." What Allyn has learned amounts to a field manual for U.S. businessmen.

When Allyn pushes his company into a new country, he tries to give the market the product it wants, not the product he thinks it ought to have. For example, N.C.R.'s bookkeeping

machines for the Middle East make entries from right to left as the Arabs do, have 72 Arabic

characters and figures. Allyn believes in hiring the people in each country to run his business, is proud that there are only six U.S. citizens among his 23,000 employees overseas.

Nor does he make the mistake of treating foreign staffers as poor cousins. Many of the same benefits that N.C.R.'s U.S. workers enjoy extend throughout the company, and Allyn pays special attention to the ways of each land. When N.C.R.'s plant near Yokohama was opened, it included a Shinto shrine for the workers, in the Japanese tradition, and Chairman Allyn placed an offering of leaves on the altar. To help teach U.S. customs and business practices, Allyn invites many foreign businessmen to be N.C.R.'s guests at the company's seminars at Dayton, this year expects 2,000 visitors from overseas.

Allyn had a master to teach him: John H. Patterson, N.C.R.'s founder, an erratic genius generally credited with being the father of modern salesmanship. Allyn, born in Madison,Wis., was just out of the University of Wisconsin ('13) when he went to Dayton to attend a wedding. He paid a visit to the N.C.R. plant and noticed a sign listing 100 reasons why it was a good place to work.

Only one really caught Allyn's eye: "No relatives in the business." Patterson did not really

mean it. But it was enough to persuade Allyn to start clerking at $20 a week, though friends told him that the cash register was a dead-end business—everybody has one.

Working for Patterson was an experience. The boss liked everyone to be on the job at 6:30 a.m., insisted that executives wear vests and join him in his food fads (he once heard that Bulgarians lived long because they ate garlic, had plates of the buds served at every lunch). Young Allyn survived it all, and at 27, he was comptroller and the youngest member of N.C.R.'s board.

BY 1940, Allyn had been well trained to take over the top job. In 25 years at N.C.R., he saw sales doubled to $40 million. As boss, Allyn has multiplied them another tenfold. During the war, he took N.C.R. into defense work, but made sure he would be ready for the worldwide boom he saw ahead. With peace, Allyn hurried to Germany to check on N.C.R.'s Berlin plant. It was gone. "The Russians had rolled up our plant like a rug and hauled it behind the Iron Curtain," says Allyn.

Allyn built new factories at Augsburg and Berlin, put up others in Scotland, Sweden, France, Brazil, Japan. Then came the new products: registers and calculators of every description.

N.C.R. developed an automated electronic bookkeeping system for banks, added sales of $70 million in the first two years the system was on the market.

Allyn hopes to push his new products overseas to help foreign retailers, knows that the cost comes back many times.

Says Allyn: "We consistently invest part of our profits in the countries where they are earned. You meet the responsibilities of foreign operations as well as reaping the benefits."